Oystercatchers: from shingle beach to roof-top

After over 150 years of successful exploitation of new breeding areas, there are signs that UK Oystercatchers are experiencing predation problems in the Scottish hills and facing disease-related issues on at least one Welsh estuary.

More.....see WaderTales by Graham Appleton. The Understanding Predation project gets a mention.
Posted by Simon Thorp at 19:11 No comments:

This seminar was held on 3 May 2016, and 64 people had booked to attend.  I was grateful for SNH's hospitality at Battleby where the auditorium, refreshments and lunch were provided for the seminar.

The seminar was opened by Hugh Dignon, Head of Wildlife Management for the Scottish Government, and Andrew Bachell, Director Policy & Advice for SNH, and both stressed the importance of this project for their own organisations.  There would be support for imaginative, radical thinking and we need to adopt a more sophisticated way to tackle predation issues that moves beyond a single species approach.

James Butler, now working for CSIRO (an Australian research organisation) and Juliette Young (CEH) presented a case study of the development of the Moray Seal Management Plan.  There were similarities with the challenges identified by Understanding Predation in that there was agreement that some control of seals was required but a mechanism had to be found to achieve this.  A more flexible approach to licensing the control of seals, on a local basis, has helped achieve an effective management solution.

Ten proposals for work to apply the Understanding Predation principles were presented by a range of organisations, and seminar participants were formed into cross-sector groups to consider the concepts that had been promoted.   It was agreed that there should be a focus on Waders and the title for a framework to cover future work was agreed: "Developing management prescriptions for the conservation of waders in Scotland". Within this framework, the cross-sector groups were asked to consider: what was required, where it should take place (in general terms) and who should do it.  There was broad agreement, although there was a divergence of opinion on whether a national or local approach should be adopted.

To summarise the discussion, lists of issues were agreed to cover: where any work should take place, the scale, what was required, the constraints and the next steps.  It was agreed that the Project Steering Group should be reconvened to consider and refine these lists, with a view to presenting proposals to the Moorland Forum about how future work should be structured. This approach will also be discussed at the Chairman's Working Group meeting on 6 May 2016.

At the end of the seminar, Bob McIntosh, former Director Environment & Forestry for the Scottish Government, provided his view of the discussion.  He suggested that there was a clear appetite for change and quoted that "if you keep trying to go in the same direction, you will always get to the same destination".

If we want to reach a different destination, we must be prepared to change direction.
Posted by Simon Thorp at 13:01 No comments:

Courage can save Curlew in Scotland - say Gamekeepers

Gamekeepers believe a novel conservation collaboration could yet prevent the call of the Curlew from being silenced in Scotland, if bold ideas are translated into concerted action.

Wading birds have declined alarmingly in this country and Scottish Gamekeepers Association (SGA) warned of the consequences of inaction during its Year of the Wader programme, 2014. A ten year project by GWCT at Otterburn showed birds such as Curlew, Lapwing and Plover produce up to three times more chicks on land where gamekeepers legally manage abundant predators. However, although managed moors are bucking the downward trend, wader number are continuing to crash in Scotland overall and gamekeepers fear losing the call of the Curlew forever.

Scottish Government tasked countryside bodies to work together to address predation affects impacting the survival of waders and other wild birds such as the rare black grouse.
The novel collaboration of environmental, farming, forestry and gamekeeping groups- run by the multi-body Moorland Forum- is combining science with local knowledge; a new conservation approach.

Following a workshop seminar of stakeholders this week at the SNH office at Battleby, the project is now preparing to move towards the best options to save Scotland’s wading birds. And gamekeepers, who have been calling for decisive action for over a decade now, are hopeful the ‘Understanding Predation’ project will finally see a reprieve for the embattled birds.

“There is an acceptance now of a need to move quickly before we lose some of these species. There is also an understanding that what is currently being done is not working,” said the SGA’s Ronnie Kippen, who sits on the project steering group. “Only last year the Curlew was placed on the conservation red-list and without action now, the outlook is not great. The speed of their decline is a major concern.

“What has been new about this project is that it has brought together people often with different views, with a common goal. Importantly, it has given practitioners who manage the land every day an equal right to have their opinions taken seriously, alongside published science.

“Simon Thorp of Moorland Forum, Juliette Young (Centre for Hydrology and Ecology) and Chris Wernham of BTO and the rest of the team deserve thanks in managing this.

“Messing around now with lengthy projects to find results stakeholders already know is not going to save one wader. It will use scarce public resources and, basically, we don’t have time. There needs to be bold decisions now and, if we are going to save our waders, farmers, gamekeepers and shoot operators are all going to have a part to play, as well as scientists.”

The Birds of Conservation Concern report, published in December 2015, placed Europe’s largest wading bird, the Curlew, on the red list as a species of ‘highest conservation concern’.
Red listings are attributed when a bird’s number or range has halved in the UK or if they are considered to be under threat of global extinction.

In 2013, the State of Nature report sounded alarm bells for other waders, with Lapwing and Golden Plover decreasing by 53 and 50 per cent respectively between two study periods, 1968-72 and 2008-2011.

The overwhelming majority of attendees at the Understanding Predation seminar this week acknowledged the current licensing system in Scotland does not offer adequate protection to wading and wild birds during the critical breeding window.  The project steering group will now assess various adaptive management options in a bid to stem the declines before more birds are lost.
Posted by Simon Thorp at 11:07 No comments: 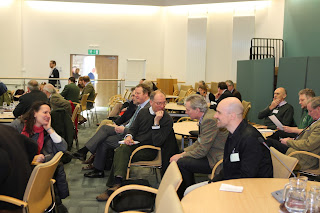 Today marks the closing date for the submission of project proposals ahead of the seminar next week.  That said, we will welcome proposals at any stage, but please let us know if this is what you plan to do.

There will be no shortage of issues to discuss next week, but the aim behind the project proposals is to encourage participants to consider the issues in advance and come up with their ideas for what the future might look like.

If you are struggling to download the full project report to read the section on Collaborative Actions ahead of the seminar, help is at hand.  I have added an extract from the report, which just contains this section, to the project's webpage.

This will provide easy access to the essential reading before the seminar.  No excuses now!

A final seminar will be held at the SNH Conference centre at Battleby on 3rd May.  All those who attended one of the three Project Review Seminars have been invited and at present 60 people have asked to attend.

The purpose of the seminar will be to:


The principles established during the project will form the basis of the discussion during the seminar:

The seminar will provide an opportunity to review where we have got to with the project and more importantly allow us to consider how we can apply the project findings to make progress through the complicated, sensitive issues that are associated with predation.

Rob Yorke is a commentator who seeks to present a balanced view of a wider environmental debate.

He has a keen interest in the Understanding Ppredation project.  He attended the Project review Seminar in Edinburgh, and will be attending the final seminar at Battleby on 3rd May.

His blog post on 5th April has Harnessing Tension as its title, and it provides some background to the article 'Ending the Conflict' that was published in the April edition of The Field.  The article covers a range of issues covered by Understanding predation and 'explains why we must work together'.  There is a direct reference to the project in the middle column on the third page.
Posted by Simon Thorp at 13:35 No comments: